I got a strange entry in today's rep list called "Serial upvoting reversed". I don't remember a question with that name and was curious to see what it was about, but the really strange thing is that unlike the other entries this one is not clickable. I guess I got a 150 bounty a while back and someone changed their mind who should get it? I know there's been a bunch of discussions about serial ports, although I don't remember a bounty like that specifically. Of course now I'm curious about what I wrote and what the better answer is. How can I see that questions, or is there something else entirely going on? Please explain.

Here is what I see:

Nope, this isn't about a post on serial communications. As clabacchio noted, this is about reversing votes posted by a single user to another. This is considered fraudulent voting, and has been removed. The votes were on posts which you'd previously received reputation for. Rather than deleting those entries in the log, the effect of the votes were reversed by this entry. The votes were deleted from your posts, but I don't know which posts were affected. A similar thing would happen if someone were to decide that they don't like you and downvote all of your posts.

The problem here is that a vote total ought to be a measure of the quality of each question and answer individually based on their content as well as in concert with the author's total reputation. Your accumulated rep is an indicator of your trustworthiness, but each post you make must be able to stand on its own: We won't let you rest on your laurels!

What happened here was that someone opened your profile, opened 15 of your answers, and upvoted all of them without voting on any other posts. Take a look at your log from yesterday: 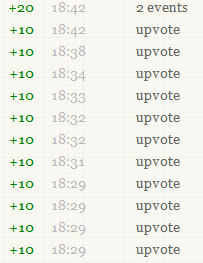 Those votes are all from the same user.

In some cases, this is evidence of rep-farming: Creating multiple accounts and upvoting yourself. However, I've done some analysis using a combination of common sense about your character and behavior together with some fancy-shmancy tools that analyze your activity on the site and concluded that you're not doing that. Not a difficult conclusion, of course, but it needed to be investigated.

Here's a snippet from one of the tools I used showing what happened: 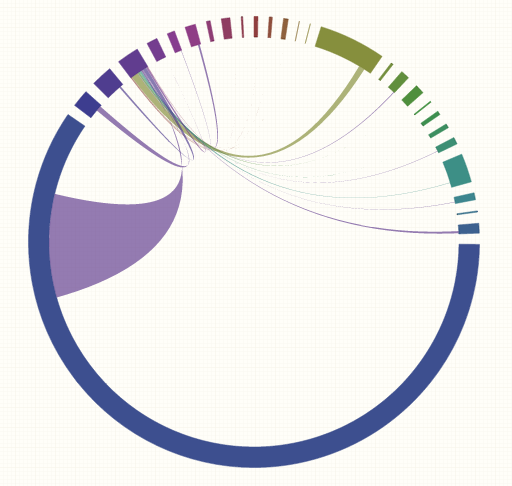 Each chord segment in this circle is a user. The chord lengths reflect the site rep of each user. You're the large blue chord at the bottom. I've clicked on the purple user at the upper left which is the serial upvoter. This causes the user chord to radiate arcs of upvotes. The purple arc from this user to you at the left is to scale with the widths of the other arcs terminating at other users: Of the votes that this user has made, 85% have been to you. That's not an analysis of posts based on merit, that's a fan club. It distorts the distribution of votes and doesn't help anyone.

I've sent a gentle, instructive email to the user referencing this post, so it should stop. However, this could happen again from someone else.

No, this is due to a sort of algorithm which analyzes the votes made by an user, and if it detects that an user is serially upvoting posts from another user (always the same), it deletes them, to avoid botting.

So probably this system has detected someone upvoting you continuously, and deleted the supposed misbehavior. So it's not clickable because it's the sum of many votes on different posts.

If you look at your profile, yesterday someone upvoted many of your answers (I guess 15), giving you 150 rep which has been removed today.

Not the answer you're looking for? Browse other questions tagged support .