I'm in the process of evaluating proposals that have entered Commitment. Specifically, I was looking at this propsal:

Proposed Q&A site for both new and experienced users of the Lego MINDSTORMS robotics kits (NXT, RCX, WeDo, etc). Other users could include the Mindstorms Developer Partners, and various developers of both hardware and software for the Lego Mindstorms robotics platform.

Would this topic be welcomed on this site? Please look over the proposal and let me know if the questions seem on topic or off topic for this site.

The users look to be a of the users of this Stackexchange, and their experts would bring a different approach than many of our experts, which may be good or bad. The NXT system almost makes their customers users of a service, this site seems to target designers - Similar to the distinction between Superuser and Stackoverflow. Here's a Venn diagram: 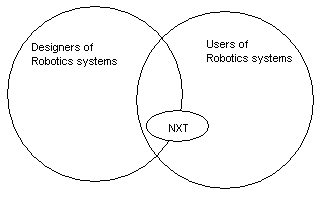 While the members of this proposal probably have some 'user' attitude that would not fit well here, most questions probably would fit well. The scope of E&R, in my mind, extends partially into the "Users" domain in the above Venn diagram - mostly for those users who are trying to move into the "Designers" domain. To determine if this is a true statement (and to save you all some time), I've copied over some questions.

Note that a few of these were rejected because they were deemed too subjective, not off-topic. Interestingly, "Is it appropriate to use a PID Controller to smooth UltraSonic sensor readings?" got just a few on-topic votes and an "I don't get it" comment. Similarly, "What is I2C? I hear people making sensors that use I2C, but what is it?" only got two votes.

OK, time for some conclusions:

Edit: Conclusions below were from before https://bricks.stackexchange.com/ existed. They're currently in public beta. Ask NXT questions there, not here. Also, remember that we're no longer about robotics.

In the end, I feel that these topics would be welcomed on this site - Not because the attitudes of the members match those of our users, but because the two topics have a lot in common. Similar to the physical/cultural anthropology grouping that Joel Spolsky blogged about, we don't really have a lot in common on the inside, but we can get along. While the C guys and SQL guys on Stackoverflow don't have the same approach to solving problems, they coexist because they're both about programming.

Similarly, NXT people and the EEs on this site can probably get along just fine, and even share some knowledge. When I don't have the time to build a solution from scratch, they'll be there to help me, and when they want to learn about PID controllers and I2C, I'll be there for them. Come on over to our little corner of paradise - the sand is warm, and the C is beautiful!

One major feature of the Mindstorms system is that at the mainstream end, no electronics knownledge is required whatsoever. In contrast, I'm noticing a vast amount of electronics questions on this site, with only a small minority actually pertaining to robotics. Particularly, I feel that questions here should be be tagged one or both of "electronics" and "robotics". I can easily think of questions that would relate to one or the other, without expanding into both. But I digress

However, I wouldn't say that users of the Mindstorms kit aren't interested in other electronics/robotics applications. The issue might be more the otherway around: after all, the Mindstorms user base has an average age around 5 years younger, so the questions might be viewed as "too simple" by the current users of this site

One of the primary reasons I made this proposal, and why it's so important to the community, is that we recently lost the core of the community, a forum called NXTasy which had been running for around 4 years, due to loss of contact with the owner of the hosting.

I would welcome users of the Lego Mindstorms robotics kits at the Electronics and Robotics site. Nearly all of the top 10 "on-topic" questions look like they would all be on-topic at E&R.

A few of those questions look slightly more appropriate for Stack Overflow or Lego. I can see it may be better to have one site focused on Mindstorms, rather have Mindstorms information split up and hard to find among a bunch of StackExchange sites, especially the firehose that is Stack Overflow.

I don't see a single one of the top 10 Lego Mindstorms questions that would be on-topic at the "Gamers" video-game Stack Exchange site.

@reemrevnivek, you mention "Users of robotics systems", and imply that most of the questions such people have would be off-topic at E&R. Could you tell me which Stack Exchange site is more appropriate for such questions?

Would it be possible to launch the Lego Mindstorms proposal into an early beta, and then re-evaluate the merge based on the progress of the site?

Or does the current system not allow beta site merges?

With the probable imminent demise of the Lego Beta site, and the imminent birth of the Robotics site, such questions are (IMHO) not on-topic here, but should be over on Robotics.SE

I consider there are some interesting overlaps between NXT and this SE site, and particularly robotics one. Indeed, both have to do with real-world algorithmics issues (as opposed to computer algorithms, these one have to deal with "real-world" constraints - like motor speed, wheel and terrain friction, and so on). Considering that, I think there is a good bunck of questions that could go in this SE site (assuming most of the others could be redirected into Lego SE site to come ... a little later).

As a consequence, I indeed think Lego mindstorms would be on topic on this site, provided it follows its definition (that's to say talk about electronics and robotics, whichever the supporting platform is).

I think this is a good example to look at to see if it would work on our site: https://electronics.stackexchange.com/questions/6741/is-it-safe-to-configure-a-us-i2c-sensor-to-the-same-port-multiple-times

No one has answered. I fear this will be the trend on this site. The Lego Mindstorm stuff is great for engaging a younger audience, but the questions that will be asked will be of a completely different nature then the ones we already have on the site. Even the answers themselves will be fundamentally different and wont be accurate for the 2 different audiences that we are looking at.

Not the answer you're looking for? Browse other questions tagged discussion on-topic .

1
"Electronics and Robotics" has been renamed to "Electronics"
7
What is Chiphacker?

1
"Electronics and Robotics" has been renamed to "Electronics"
9
Does the Area 51 proposal "Electronics & Electrical Engineering" duplicate this site?
4
Are questions about writing an assembler on-topic?
57
Does EE.SE have a problem with the treatment of newbies?
12
Plethora of overlapping SE sites and concerns about them
1
Would an electrical engineering-themed SE which focuses on more theoretical / interdisciplinary / research-level / etc. topics be useful?
0
Need help understanding "..asking for a component, which is off-topic."
5
Explicit close reason: "OP bought undocumented stuff, asks us instead of seller for documentation"