Reviewing and flagging answers causes the forum software to automatically add a comment impersonating me?

I have been using the various content-review options, and trying to flag things as appropriate.

However, I got a response to a comment on a answer where I never left a comment!

It seems that if I flag a question as "Not a real answer" using one of the content-review mechanism, it automatically adds a comment:

This does not provide an answer to the question. To critique or request clarification from an author, leave a comment below their post - you can always comment on your own posts, and once you have sufficient reputation you will be able to comment on any post.

Using my name, without being obvious that it's going to auto-insert something using my name.

While I think adding a "Add this pre-defined comment" button for people with enough rep, adding such a comment, and particularly making such a comment using my username, without asking or clear notification that this is going to happen is a very bad idea.

I'm generally OK the idea behind this function (and I do think that something in it's vein is actually a good idea), but I think it should be a separate button, or similar. The flagging and the automatic-comment-insertion should be two separate options, so if someone else has already added such a comment, or in a situation where (such as the example above), where the OP was basically saying he did what was detailed in the original answer, and it worked.

Basically, I log on today, and someone is responding to an automatic comment that the SE software made in my name that didn't appropriately address the issue at hand. If I had known the forum software was going to make such a comment, I would have deleted it, but I was never notified that it was happening.

As I can see here, you used the "recommend deletion" option in the review queue:

The "recommend deletion"/"delete" option in the review queue is pretty clear that it is leaving a comment for you: 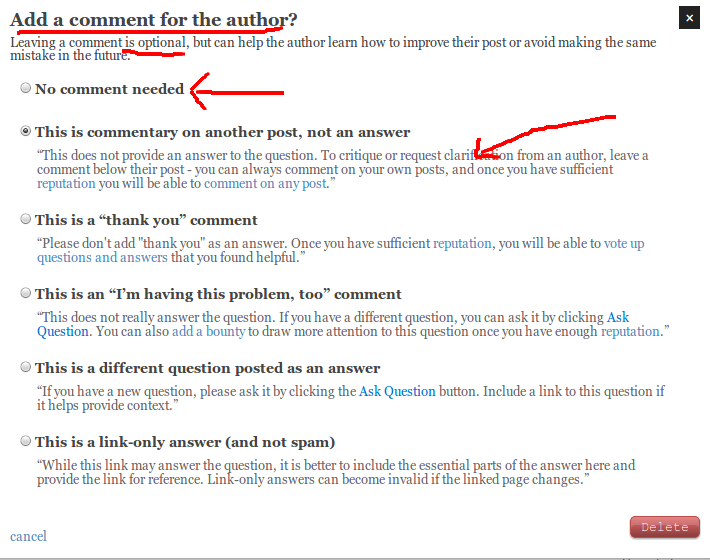 To be clear, the NAA flag didn't cause this. It was the button you clicked in the review queue.

If it should have been a comment and you click that then it adds a comment explaining it to the new user. This is ideal function.

In this case it really was not a comment, it was instead a new question, and the user does not yet understand how the SE system works unlike a normal forum where you just post your new question. Had it left that comment, others would validate your review, after a few validations it will delete the post. That automatically left comment will notify the user even after the delete, which you typing a comment will not.

As a new user, you post thinking it is a normal forum with a goofy layout. Suddenly your question is just deleted, no answer, everyone ignores you. That is not ideal, a comment explaining how we are different is, which this system handles.

Not the answer you're looking for? Browse other questions tagged discussion user-interface .

0
Making changes to someone else's answer
4
What do we do with users who ask questions but never vote?
5
Posting multiple solutions in a single answer
9
Please flag spam!
3
Review guidelines for new and late posts
11
Third party sites replicating EE.SE questions and answers without attribution?
10
Is your current site name of “Electrical Engineering” responsible for an uptick in question quality?
0
Need help understanding “..asking for a component, which is off-topic.”