Hi All, as you can see the new design just went live. Which means this site has been officially launched! Congratulations! Thank you for your valuable design feedback.

If you're still seeing the old favicons, please load the follow urls and do a hard browser refresh.

(update: I just noticed the Meta favicon is the same as the main site's. I put in a fix for it just now, will be in the next build) 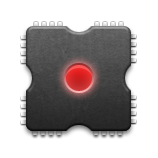 We have also styled the site's twitter account and the chatroom theme to reflect the new design.

If you see any CSS bugs, please start a new post and tag it with "design" and "bug."

Love it! However, you've probably got a better monitor and better eyes than me. The contrast throughout the site is very low, and I'd like a little more overall. Hate to put that on you, but it needed to be said.

One area where it could be done is the vote arrows. On other sites and the beta, the arrows are a bright, highly visible solid orange after they're clicked. The blue vs. gray and black vs. gray is fine, but it would be much more visible if you filled the image after it was clicked.

Also, I don't see the inverter circle for the downvote like we talked about, unless those are supposed to be diodes, in which case they need horizontal bars.

I really like the new design! It looks neato!

I don't like the new font either. For a site that deals with numbers a lot, its representation of digits 1234567890 leaves something to be desired -- some of the digits are only a half-character tall, and others fall below the line. I just left a post with a part number 68HCS08, and it's not clear at all that the 0 is a zero, and not an o.

To be honest, I wasn't super impressed when I saw it at first (it doesn't pop like the old theme did), but now that I look closer at it, I see the clever use of objects + symbols from parts and schematics. Once I figured that out, the theme makes more sense and has some cleverness to it. Which I think demonstrates the ingenuity of this community.

Its good that I dont have 125 reputation, or else I would have missed it.

I really like it so far, maybe some more detail (or color) to the up/downvote arrows but other then that it looks great to me.

Did the font change? I don't like the font.

Absolutely horrible, wastes screen estate and has no contrast at all. Huge fat logos and backgrounds and other adblock food all over. Different parts of the page no longer cleanly separated. Everything but the main text bits essentially destroyed.

The really terrible thing is, this was over all one of the cleanest and best functioning sites I've ever seen.

Not the answer you're looking for? Browse other questions tagged discussion design .

39
UPDATE: choose your design! - A design update is coming!
13
Design for Electronics and Robotics
0
The zero is an o in comments