New users probably knowing nothing about Chiphacker and the intent of this question is becoming a reference for them.

So, what is the history of the site Chiphacker?

Chiphacker was a Q&A site running the old Stack Exchange platform which was created and administered by Marcus and Maddy of littlebirdelectronics.com as an auxiliary support line for their Sparkfun-like, Sydney-based online electronics shop. It featured the much-loved Electropus (excellent image below found on the twitter account). 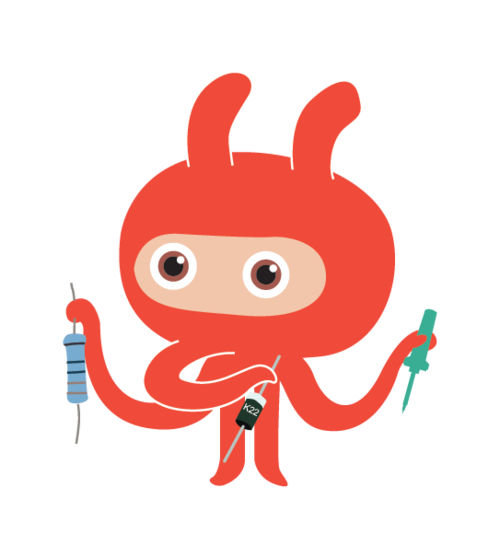 While Chiphacker had a fairly vibrant and healthy community (unlike its sister site/competitor Electronics Exchange), it wasn't as successful as it could be, and other SE 1.0 sites were struggling. Stack Exchange Inc. opted to phase out SE 1.0 sites, and started Area51.

The Electronics and Robotics proposal on Area51 was created to replace Chiphacker:

At one time, there were three Electronics Stackexchange sites! This question and this question are informative with respect to the migration. In the end, Chiphacker's content (both users and questions/answers) were migrated to the new site, while Electronics Exchange content was dropped.

The original name of the Area51 site was "Electronics and Robotics." After some discussion about creating a robotics-only site, discussion about allowing robotics on the site (for example, here and here), it was decided to remove Robotics from the title and scope.

This resulted in the name "Electronics", which was used during the beta period. However, this caused great stress about the potential for a flood of consumer electronics questions, and we launched as "Electronics Design".

Unfortunately, this caused us to run afoul of someone's trademark. Therefore, we were renamed to "Electronics Engineering", which is our current name. Of course, there are other names that have been proposed...The history isn't over yet!

Chiphacker was a Stack Exchange 1.0 site:

12
ANNOUNCEMENT - Site Title Change
8
What about Electronics and Robotics in Area51?
10
Possible Name Change?
5
Lego Mindstorms Robotics On Topic?
6
Will this site retain the chiphacker name?
1
"Electronics and Robotics" has been renamed to "Electronics"
9
May I ask questions about industrial power system design?
7
Electrical Engineering Community divided...
4
Is this the right place to ask about Kinematics or AI?
4
Are questions related to electronics testing and manufacturing appropriate?
See more linked questions

4
When do we launch, and what happens then? *What needs to happen before we launch?*
0
Are these tags really unnecessary?
0
Proposal for new close reason -- "Low expertise", "Too Basic"
0
Can we ask what software is best for the job
15
Stack Exchange is going to change the way people are treated
9
How do we prompt for more detail?
3
What's going on with this old question getting completely changed years after the last activity?