I was looking up on google why there was an x in RX and TX, and I found this. While maybe it was off-topic and should be in English.SE (Though I think EE makes more sense. At least, the OP will find a better answer here), how could this be marked as "opinion based"?

Even if the answers are opinion based, the "closed" box states the question is what needs to be edited. This doesn't make sense to me - the question is as objective as a question can get. History is true and permanent. Maybe no one knows the history, and thus may create bad answers, but regardless the question itself of "What's the meaning of “x” in RxD and TxD of UART?" just isn't opinion based at all. It's a very explicit and factual question.

If the answers are comments are poor, perhaps require higher reputation to answer. I've seen this implemented before. I just don't believe this should have been marked as "opinion based".

Am I simply misunderstanding the meaning of "opinion based"?

You have the correct definition of "opinion-based", and I agree this question does not really fit this definition, because as you said, there cetainly is an objective, factual answer to it somewhere.

But I don't think it is on-topic either. In the help center, examples of on-topic questions are:

The common denominator being electronic design and/or theory. Word etymology isn't design nor theory, so it doesn't have to be covered. Whether it is on-topic on English.SE, I can't tell: I'm not familiar enough with this site. But you must know there are some questions that are not on-topic anywhere on the stackexchange network, so it is not because it is off-topic here that it should be on-topic on English.SE, or the opposite.

So, the question has been rightfully closed (and five people voted to close, so there has been a consensus). Now, what happens is that there are a few canned close reasons (see screenshot below), but "not in scope" is actually not part of them. You can formulate a custom reason, but people sometimes don't take the time to type it, and they take the nearest, or least irrelevant, canned close-reason that is proposed by the system.

The net result is the same, so it doesn't matter that much, except for the OP to know why it is off-topic and not make the same mistake again. 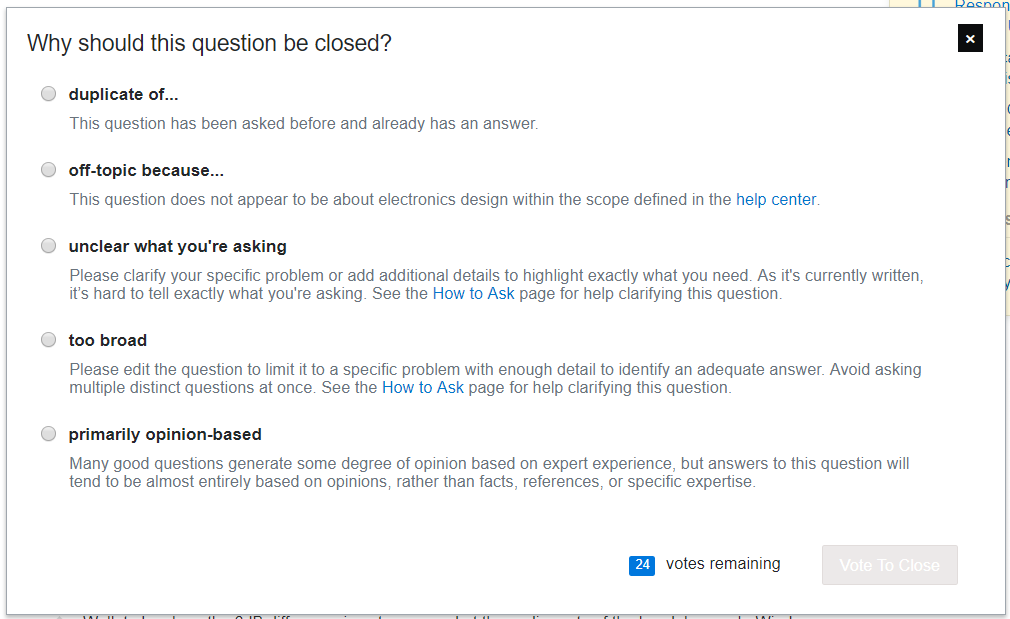 I feel some amount of confusion comes from the fact we don't have the "out of scope" close reason than many other sites have. This incites reviewers to abuse other close reasons for questions which are not among the topics that users are supposed to ask about. For example, if someone asks how to fish on Raspberry Pi SE, the question will be closed as out of scope:

There are similar close reasons on other sites ("Blatantly off-topic" on StackOverflow, etc.). On EE.SE, we get the following: 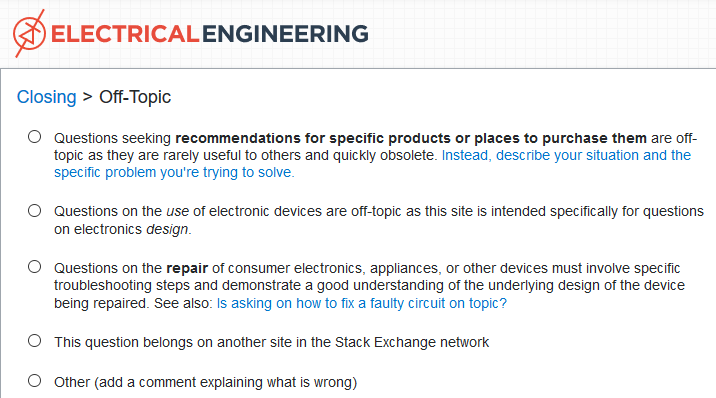 So the reviewer will either have to write a custom close reason, or get imaginative.

I don't agree with the posted answers so far. I believe the question is on-topic and should be re-opened. No other Stack Exchange fits the question better either.

The posted answer isn't great and opinion-based, but only since it lacks sources. That is no fault of the OP.

I'm voting to re-open the question.

(It is quite possible that the answer originates from radio communication and Morse code. Wikipedia seems to agree and in turn cites various sources.)

Not the answer you're looking for? Browse other questions tagged discussion closed-questions .

28
Should we keep component identification questions?

1
Can this question be fixed?
3
Duplicate question, question linked to no longer in system
0
How do I make an opinion-based question into a proper one?
1
Question migration anti-patterns: Skeptics SE
2
On "Opinion based answers"
1
Question about RAMS engineering closed as "opinion-based"
9
Unfair Use Of Moderator Tools The Sequal
2
Can you help me to improve my question?
7
Answers based on questionable science and possibility of spam