I'd like us to participate in the three-vote close experiment

I often feel that questions linger too long before being closed, collecting answers making it difficult to edit a closed question. I would like EE.SE to take part in the recent site-wide "three-vote close" experiment. The main meta post can explain it better than I can:

I believe that closing a "questionable question" quickly will lead to better quality over all. Closing a question is not a punishment, nor is it the same as deleting it. A question is closed because it has problems that should be fixed before answers start to arrive. As soon as an answer is posted, editing the question is more complicated.

As far as I understand it, it will also be easier to reopen a closed question — something I also approve of.

I've reviewed the request and your recent history and I can definitely see that this will likely benefit the site. Thanks for your patience while we got to the place we could make this change.

To determine whether to make this change, I used a few queries - firstly, I like to see what percentage of questions that get at least one flag or vote to close get handled - either closed or marked "leave open". 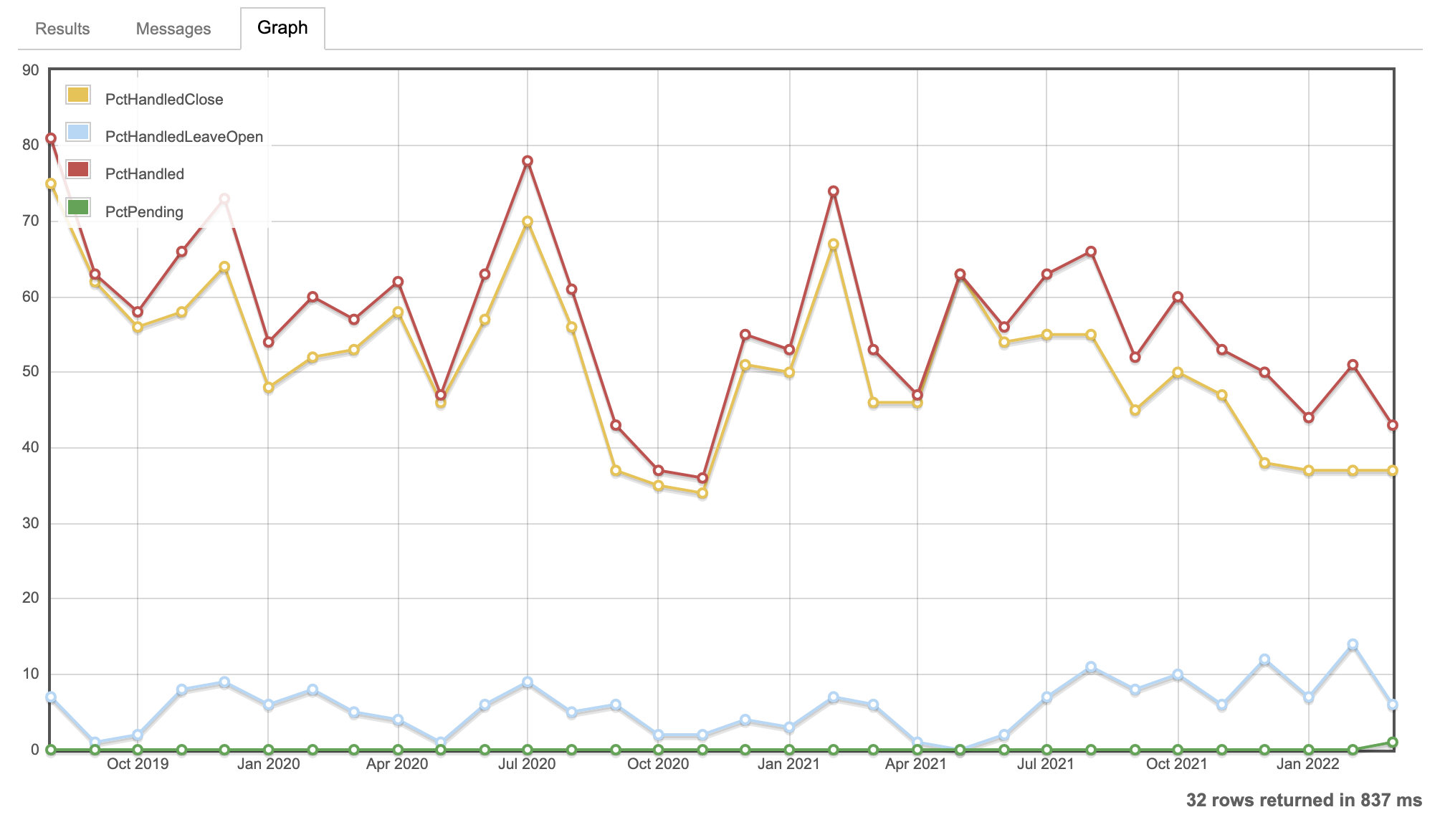 The first thing I like to note is that the graph vertical axis is 0-90%, so it can look a bit higher than it is. In general, y'all aren't usually able to get most of the questions handled. While this has changed over time, it seems that you're generally sitting around 50% handled, which means a lot of them are aging out of review. The end result of this is that the site can have a lot of content that should have been closed that sits around cluttering things up.

I'll also note that you have a pretty decent "leave open" result (~10% at times) - many sites don't seem to have such a high percentage (generally closer to 1-5%) - it's not bad but it could indicate there's some disagreement amongst voters about what's close-worthy. As such, it's possible that if more reviews were completed, those questions might actually be left open - it's difficult to know.

The other thing I check for is whether the moderators are doing an outsized volume of the close reviewing - this can indicate that they're doing more than they're necessarily expected to do. While there are many things mods need to handle, reviewing isn't one that we generally include in that. They're certainly welcome to participate but - because of their unilateral close privileges, it means that reopening questions can be significantly harder without moderator participation. 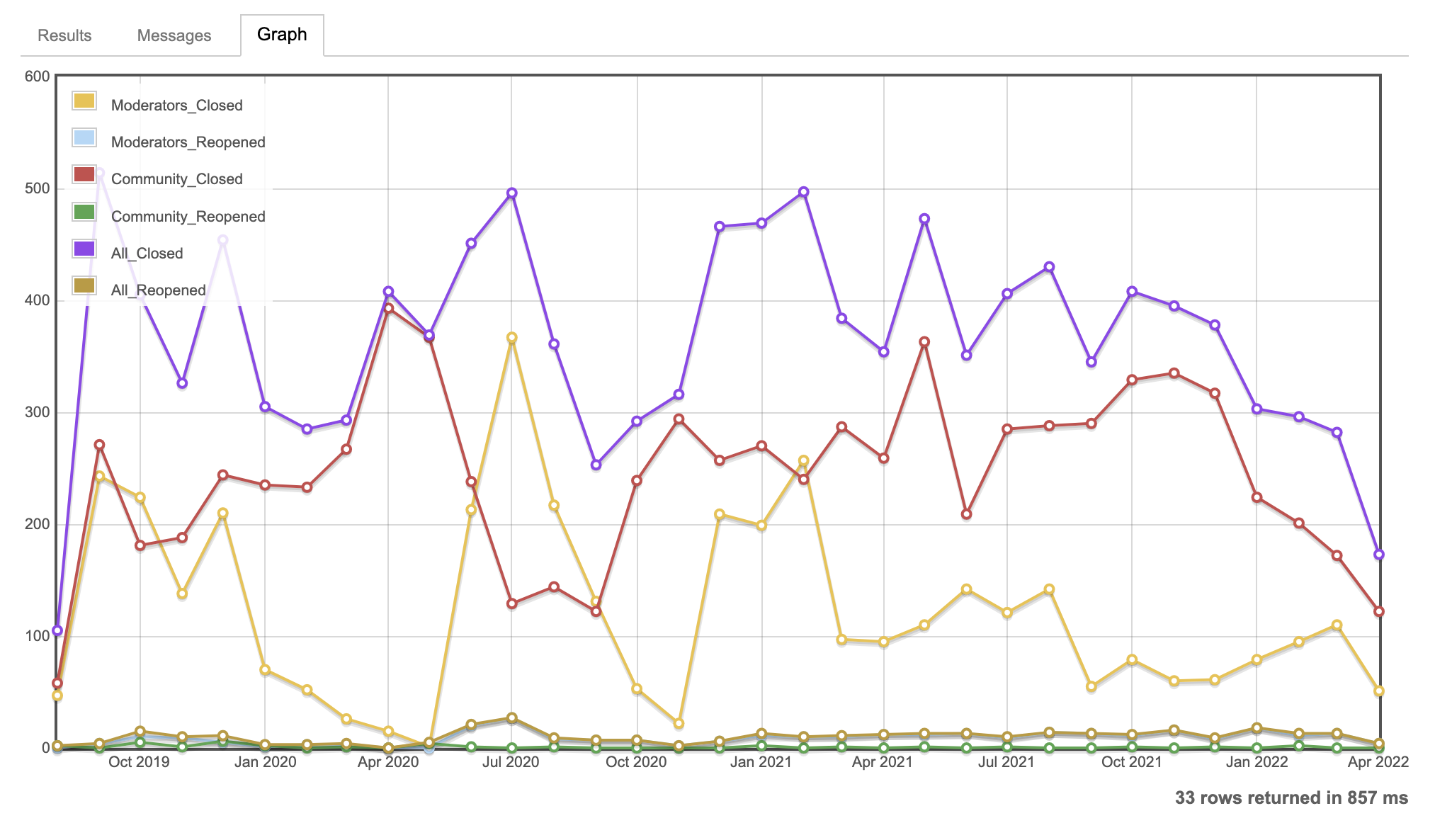 If you're interested in which votes are being cast by mods, you can see that below - I made it for a shorter period of time because it makes it a bit easier to see the lines. 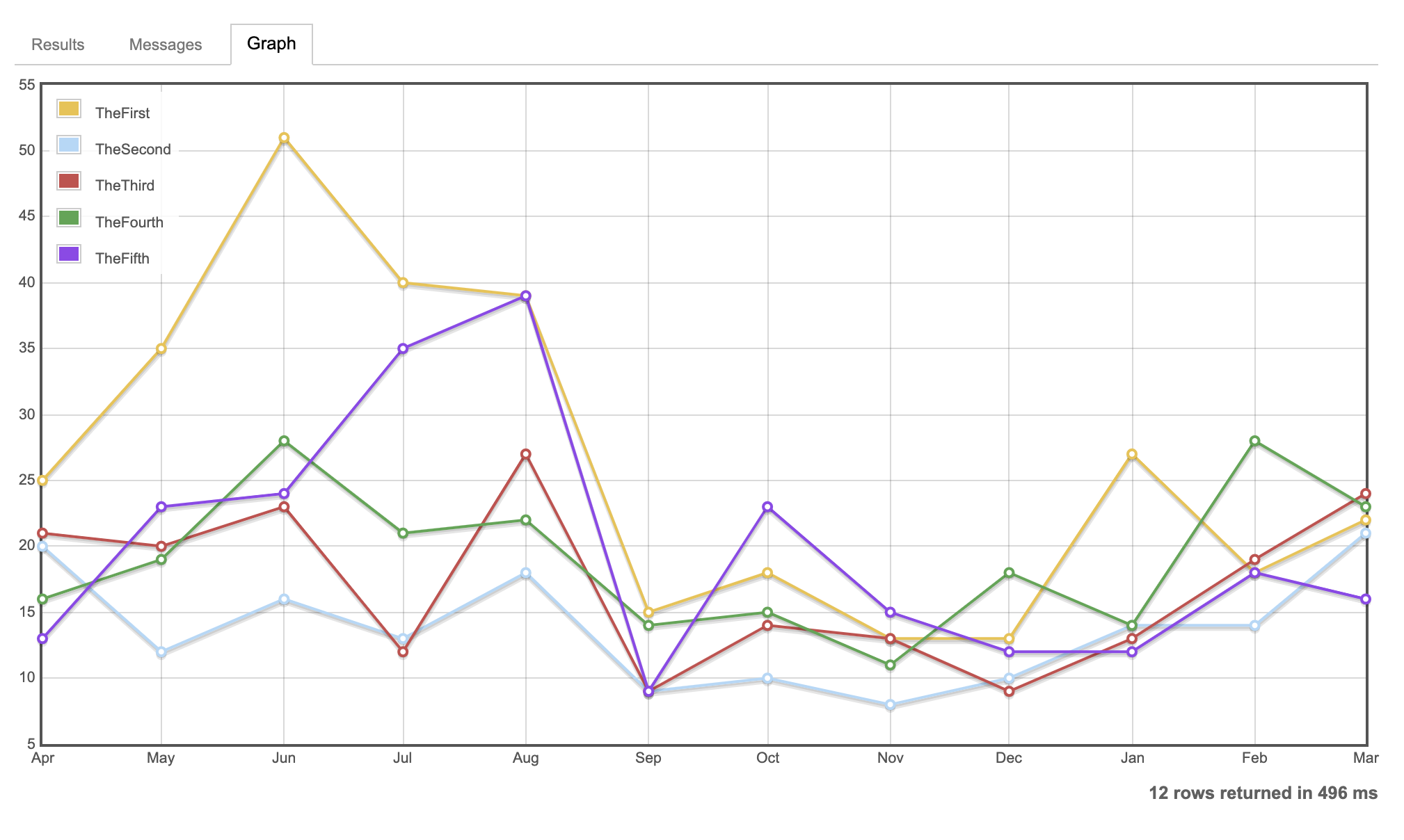 As this shows, mods don't seem to be more likely to cast fifth votes over any other and, in some cases, have cast many first votes - which is understandable! All-in-all, it seems pretty even.

So, the end result is, we'd love to see the percentage of reviews handled increase here and it looks like reducing the votes needed to close and reopen from 5 to 3 will help with that. Because the tests on other sites went generally well, y'all can consider this permanent - at least until you ask us to change it again. I'll check back in a few months but, unless there's something huge to report, I probably won't update things. If you have any questions or want to see how things are going, feel free to let me know.

I support moving to a three close vote (if SE will allow it). The close review que has been hovering from 100-200 questions that need to be reviewed for quite sometime (at least 6 months) which means we have too many question that need to be reviewing or not enough people that review. Moving to three votes would make reviewing much more effective. I believe it is more important that questions get reviewed so that these actions can happen quickly.

There are a few other comments that I have:

If you haven't read this now would be a good time: https://electronics.stackexchange.com/help/closed-questions

If we do move to a three close vote I have a reminder for those who do review.

If the question can be fixed, then edit it and make it presentable.

Help new users understand the process, many people think that closing is bad and take offense. Its good to say something on the lines of: "We need to see X and Y improvements from this question, edit it and reopen it" and help them understand the process (obviously this does not apply to questions that can't be made on topic because of their subject matter, not everyone will take the time to fix their question).

If we do move to a three close vote we will also need to step up helping people understand the process (and not being condescending) because the closing process will happen much more rapidly. Also helping new users understand the voting system is a good thing.

In addition I believe users need 3000 rep to get their question reopened (https://meta.stackexchange.com/help/reopen-questions) so we would also need people helping to get questions reopened (or flagged for reopeneing if you don't have the rep) after the question has been fixed and help people understand this process.

(EDIT: now that I think about it edits will move the question to the reopen que)

But seriously, this answer is here so that people who agree can upvote, and those who disagree can downvote.

I don't know whether a 3-vote close is a good thing or not, but don't see a real upside to participating in the test. I'd rather wait and see how the test works out and any additional tweaks are made until adopting the policy.

Not the answer you're looking for? Browse other questions tagged discussion feature-request status-completed vote-to-close .

-1
Why are so many questions getting down voted?