Why did I receive a 10 day suspension for what I believe is a perfectly valid comment with no ill-intent whatsoever?

Ask Question
Asked 2 months ago
Modified 2 months ago
Viewed 392 times
6
\$\begingroup\$
Locked. Comments on this question have been disabled, but it is still accepting new answers and other interactions. Learn more.

I was suspended for 10 days beginning March 31st at just after 2pm. My 10-day suspension ended a few hours ago. The alleged basis for my suspension was that I made the following comment under this recent question: -

To the OP: before you purchased the so-called voltmeter, did you read the data sheet to see what the input impedance is? Would you buy curtains because of the colour or because they are the right size?

The mods also said this: -

Therefore, my question is this: -

Why was I suspended for ten days for making this comment?

Let me state this: I was trying to be helpful.

So, on the say-so of some nameless people who incorrectly judged my intent, why should that result in any punishment at all?

I appealed the suspension via the normal route and was told this: -

At your request, an employee has been assigned to review the case. If they find any evidence of malicious behaviour, they will take appropriate action to correct the problem. However, we are not able to provide details of that review nor will you receive further responses about this issue.

So, it's not much of an appeal-system if you don't get any further feedback hence, why I have posted this question on meta.

I want feedback and I deserve feedback. I did not deserve to be suspended for any length of time.

Image of PM from mods should it be of any interest: - 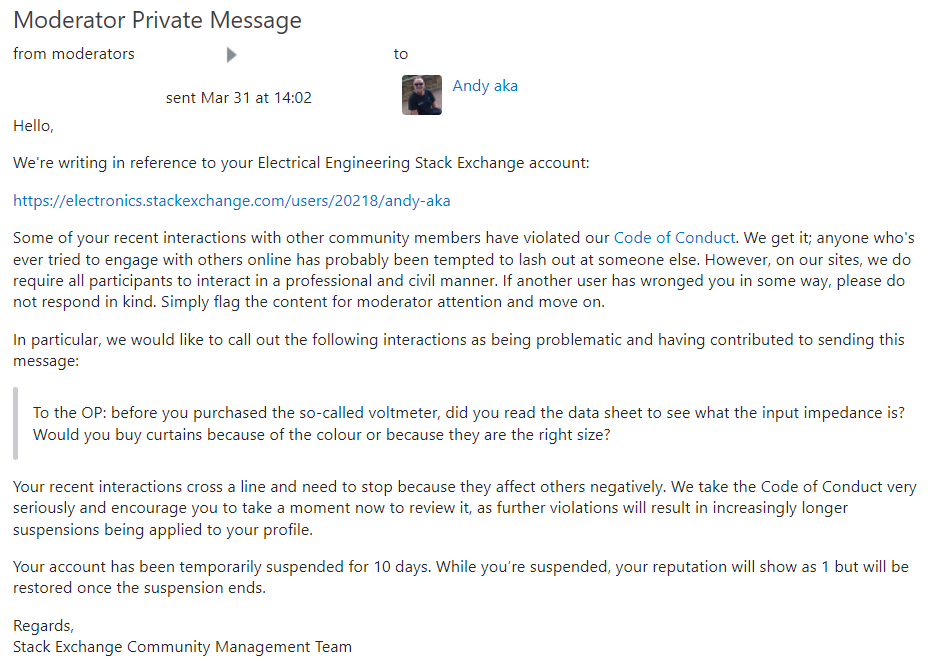 Since I'm currently online, I'll give a partial reply. At this stage, I'm deliberately not responding fully to your questions, for the reasons I explain below.

Why was I suspended for ten days for making this comment?

Actually that comment you wrote was just "the final straw" and it was the ongoing flags received on several of your comments, from different site members over recent weeks, and the events even before that, which led to that suspension with that duration.

So, on the say-so of some nameless people who incorrectly judged my intent, why should that result in any punishment at all?

Your intent is irrelevant since, as you said in another point, that cannot be known by others, with certainty. In general terms (and not referring to you) unfortunately some people lie, including about their intent when writing. Therefore relying only on what anyone says about their intent, would be untenable for moderation purposes on any internet site.

Instead we respond to how someone's words and language (which they chose and they have to take responsibility for) come across to other people, primarily through flags. This is why the Code of Conduct says, among several other points:

No subtle put-downs or unfriendly language.
Even if you don’t intend it, this can have a negative impact on others.

It is the language chosen and how things come across to (and affect) other people, which is acted upon by moderators and SE staff - not the intent behind the writing, as we cannot judge that. Multiple people assessed that certain comments you made over recent weeks, continued to come across as being put-downs / unfriendly / patronising / condescending etc. when they flagged them.

It's the same when you flag someone else's comments. Your flags indicate that their words and language have come across to you in a way that breaks the Code of Conduct, even though you cannot know their intent.

In the part of your comment which you quoted, you said:

Would you buy curtains because of the colour or because they are the right size?

Considering the original question was about the behaviour of a voltmeter, that comparison with buying curtains came across, to multiple people, as unfriendly i.e. a condescending mocking of the OP.

For the reason below I cannot say more publicly at the moment, even though it would help to better explain the lead-up to this current situation and therefore to explain the context to your questions.

If you really want us to copy into the public domain here, each of the flags leading up to that suspension and relevant previous history & communications with you (without mentioning other site member's names e.g. who raised flags) in order to give context and explain why it was a 10-day suspension as you asked above, then please say so.

Then we can discuss between the moderators how to handle this (I've never seen someone want to discuss a suspension in public before) and one of us can contact Stack Exchange staff to confirm that they are also OK with us posting your private flags and communication history here. (Normally, we wouldn't disclose this sort of information publicly, of course.)

As a genuine concern: Once the (normally private) information is put here and indexed by search engines etc., then I believe it would be very difficult for you to fully remove it from the internet, if you decided later that you wanted to do that.

Not the answer you're looking for? Browse other questions tagged discussion comments mod-abuse .

12
Editing guidelines
8
Answering questions which are off-topic
1
Can new users edit their migrated questions?
30
What did I do wrong with this "dog's breakfast" question?
1
The current state of shopping (product selection) questions (9/2018)
3
Maybe I'm two more deleted comments closer to a suspension