How did I open the MathJax menu in Safari (on iPhone)

I was viewing a post on my iPhone (in Safari) which had some MathJax equations, and I accidentally clicked on an equation and opened its MathJax menu: 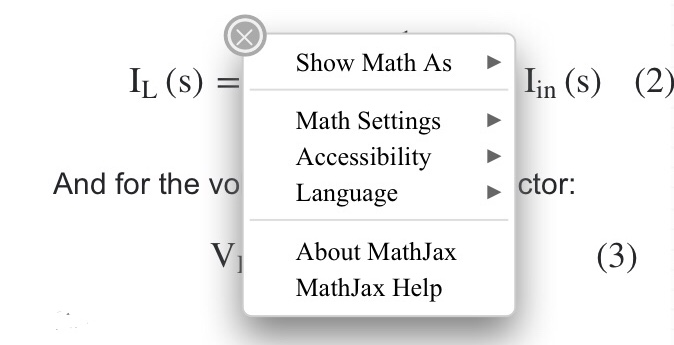 Anyone know how I did that?

I can’t seem to find a consistent method to repeat it (though I can get it to open sometimes with a random volley of frustrated taps).

To open the contextual menu on a mobile device, use "double-tap-and-hold", which is a tap followed quickly by a second (long) tap where you continue to hold down until the menu opens.

Not the answer you're looking for? Browse other questions tagged support mathjax .

3
Viewing E&R on iPhone Safari - No stylesheet
5
How can I get an 'evaluation at' vertical bar in MathJax? \right| doesn't seem to work, looking for alternatives
2
How can I mark a comment as the right answer?
1
How do you get back to the "normal" view
0
How does the reopen queue work for new users?
4
Why did the answer to my question disappear along with relevant comments?
2
How do you log out with the new header?
1
Why does our inline syntax for Mathjax different from say, the Math SE?